Hiroki San was tireless.
She reminded me of my wonderful ex Mother in Law.

Unfortunately, Yasu San had just arrived back from a week in Portugel so was exhausted. Hiroki San took us to Temple after Temple, up and down stairs, up side paths etc. It was my first day with my impossible backpack on so I was also starting to buckle. It felt like Yasu San and I were two little children following a teacher that one wouldn't dare indicate discomfort to! 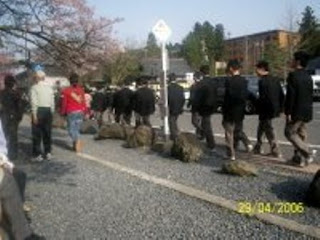 Koyasan's next generation of Monks

We kept seeing large groups of children in uniforms walk past. Apparently they were the children of the Temples and were learning to be monks.

I commented on the amount of streets and shops and she said it had always been like that, if not even more so in Kobo Daishi's day and that it was what he had always wanted. 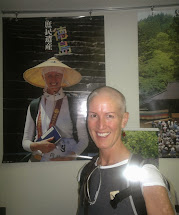